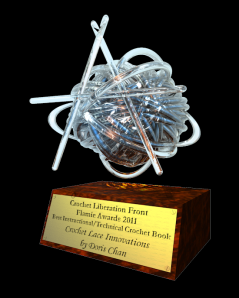 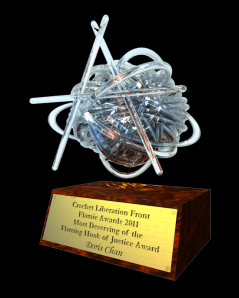 Congratulations to all the winners.  A million thousand thanks to the CFL and Fearless Leader Laurie Wheeler for shouldering the monumental task of producing the awards every year; to Mary Beth Temple and Josh Mckiernan, genial hosts of last night’s live presentation on Getting Loopy; to Darlisa Riggs, designer of these gorgeous virtual awards; and my gratitude to all who voted.

I foolishly wrote a speech, jotting down some notes to keep me mindful of all I wanted to say when accepting the awards.  What was I thinking.  All preparedness and caution go out the window at these things. So if you missed the show, you can listen to it in archives and hear how we all sort of burbled and gushed our way through the night. Go here, scroll down to the Flamies episode, enjoy.

A major contributing factor to the tendency toward on-air burbling was…  how can I put this delicately… the, uh, the festive atmosphere off mic.  Not only was there a gala CFL party going on in Georgetown, Texas, but there was a rowdy gang piled thirty deep in the Getting Loopy chat room providing support and heckling for each other.   I do hope no serious damage remains at either venue as a result of the night’s frivolity.

And, for the record, the game that was mentioned, wherein all were encouraged to down a slug of whatever libation was in hand or take a bite out of a chocolate Easter bunny (chocolate-covered Peeps may have been substituted) every time the word “crochet” was uttered during the show, that was merely a suggestion.  I didn’t force anyone to play, so am totally not responsible for any overindulgence or questionable behavior resulting from it.

Curiously, I notice this morning that half a bottle of wine is gone and a huge dent has been made in my stash of chocolate-covered Peeps. 🙂

You can see the complete list of 2011 Flamie Award winners  here at the CLF blog.  Congrats to all!