>There comes a time when a person has to put away her childish dreams and just grow up. It has taken me half a century to realize that I no longer want a pony for Christmas. I want one of these.

Or one of these.

I learned many things about llamas and alpacas while visiting the NYS Sheep&Wool Festival in Rhinebeck. Did you know that llamas, hardy, surefooted and endowed with much common sense, are able to carry as much as 25% of their weight for a dozen miles (an ability that would come in useful if I ever needed to move my yarn stash)? That their wool is soft, fine and grease-free, and comes in a wide range of colors, from white to black with shades of grey, beige, brown red, roan and everything in between (they even have spots, which I never knew)? That their poop is odorless and considered the best organic fertilizer available (how many beings can make that boast, really)? That they have no top teeth so they cannot bite? That they make very little noise other than humming to communicate? Yes, they spit. But only if you piss them off, really. And that they are generally calm, sweet-natured, curious, approachable, adorable creatures. Did I mention they give great wool? And that they cost way less to maintain than a small, bratty fat pet dog?

My chihuahua should be worried, very, very worried.

I had an amazing time at the festival. My thanks to my host Scott Meyer of Merritt Books and Sarah Breivogel, publicity manager from Potter Craft, for making me feel welcome and prepared for the book signing event. It was great meeting everyone. My big regret is that I spent the entire day Sunday signing books and chatting with friends and totally missed the Parade of Llamas and Alpacas. Doubledogdangit. 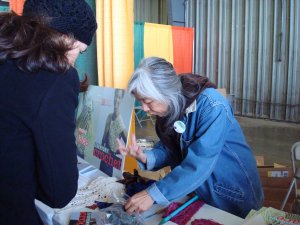 Thanks to Diane Moyer, my festival angel, time manager and bringer of coffee for these images because I didn’t think to bring a camera. DUH!

That reminds me of the list of important tips I must keep in mind for next year:
1) Fuggeddabout trying to be all cute and fashionable. Dress warmly in tons of layers even if you risk Michelin-man proportions. It was freezing. Good grief there was a half-inch layer of frost on my car when I got up on Monday. I had to take off my gloves in order to sign books so my hands were total popsicles the whole time until a visitor to my booth took pity and gave me a pair of hot hands or whatever they are called. These things are a miracle of modern science; small packs that are hot and stay hot for hours, used by hunters and other people with chronic cold hands. Gotta get me some of those.
2) Bring camera.
3) If you’re going to indulge in fried dough, stay out of the prevailing winds to avoid being tagged with powdered sugar. Oh, and steer well clear of the yellow jackets. Just ask Diane. Bring antihistamines if you are a stinging insect magnet like her because the first aid stations do not dispense any medications.
4) Get your bearings right away and try not to miss a thing. Like Building 22.
5) Travel light and watch where you’re going. It’s hard to stay out of every one’s way when there are such crowds and the sensory overload is making your eyes bug out. I got smacked around by people’s bags and run over by countless wheelies and strollers.
6) Maybe carry a small, portable yarn project that you can whip out while you’re waiting on the inevitable long lines.
7) Remember where you parked, mostly so you can stash your purchases and not have to lug stuff all day.
8) Figure you’re going to spend three times as much as you planned. You are there. The yarn/tools/books are there. Life is short. Cards accepted. And there’s an ATM on site, FYI.
9) If you’re on Ravelry, definitely get to the Rav party on Saturday night and make every attempt to get there on time. I was an hour late and missed the Bob cupcakes. Rats. Stick around for the door prize drawing. I won a set of KnitPicks Options interchangeable circular knitting needles. You should have heard the ooohing and aaahing when that prize was unveiled. I hope I didn’t seem too ungrateful when my ticket number was called and my first reaction was to shout out “I DON’T EVEN KNIT!”. Would have served me right if I had been lynched at that point.
10) Exit the parking lot via the back, the exhibitor/vendor gate. It dumps you off well away from the Route 9 gridlock. You’ll have to wander around a bit to get back to the highway, but trust me, it’s doable and MUCH faster.

See you there next year, huh?