Have I mentioned that I’ve amassed a sizable but eclectic stash of buttons? The button thing started ages ago, pre-dating all my other obsessions. It started when I was a kid and lived in the back of my family’s Chinese laundry.

Today we are largely a wash-and-wear society. You take non-washable stuff to the cleaners and perhaps let them do your dress shirts. But who would even think to send out sheets and towels, underwear and socks? I know for a fact that people did. How odd. The term “Chinese laundry” has little meaning today. But before political correctness was even a thought, many towns and neighborhoods boasted such establishments where Chinese people sweated to keep America clean and freshly ironed.

My grasp of history is tenuous and hazy. Let me paint a picture for you in broad strokes. I think the stereotype was born during mid 19th century, the era of the California Gold Rush and the building of the Transcontinental Railroad. Hundreds of thousands of Chinese, mostly men, fleeing war and poverty, left their farming villages and families behind, hoping for a better life in California, the “Golden Mountain”.

So many arrived that white landowners felt threatened by this “yellow peril” and unbelievably restrictive laws were enacted. For those Chinese who survived the intolerably cruel conditions in the mining camps and railroad crews (where masses were worked to death, or froze in the harsh winters or got blown up in the process of nitro–glycerin tunnel blasting) the only opportunities available for people who by law could not own land, obtain citizenship or bring their loved ones over were positions of neo-slavery and servitude. That meant work as household domestics or in service industries, including restaurants and laundries. I suspect that the once ubiquitous Chinese businesses have been recently supplanted by Korean cleaners and corner grocers, Vietnamese and Thai restaurants. But I digress.

Things got better, but even a century later my immigrant parents found themselves running a Chinese laundry. They didn’t actually wash anything. The stuff, mainly bed linens and shirts, were sent to a commercial wet laundry and came back ready to be sorted, folded and wrapped in brown paper parcels, all but the shirts. Those came back still damp and were hand or machine finished on site using an array of irons, presses and manglers.

Each pressing station was designed to do a specific task. There was one with three curved sections for collar and cuffs, one with two arms that did sleeves. The body presser was amazing and scary. It was an upright rectangle around which you wrapped the shirt. Then you hit the green button and the body moved into the machine where two enormous flat irons hissed into place. It makes me think of those cartoons where the toon falls under a steamroller and comes out flat as a piece of paper.

Each station had a hand water sprayer so you could dampen anything that needed it. The metal nozzles, like small garden sprayers that sent out a fine mist, were connected to the water supply through narrow bore hoses that were suspended from the ceiling over each press area. The effect was eerily snake-like. In fact, the laundry floor had this whole jungle thing going on, with the steamy air, the dense forest of machine trees with spitting serpents dangling overhead. 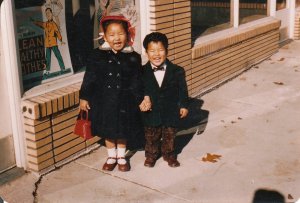 If you look closely in the shop window behind those two laundry midgets (me and my brother in our “Sunday best”) you can just make out the display sign that shows an oriental kind of guy pointing to the words “wear CLEAN HEALTHY CLOTHES”. The assumption and the clear message was that patrons here were cleaner, healthier and better than the poor slobs who did laundry at home. Aren’t we Chinese clever? 😀

I helped out wherever I could. My brown-paper packaging skills were not nearly neat enough or fast enough to be useful. (I still can’t wrap presents. Thank goodness for gift bags and shrink wrap baskets). I wasn’t allowed to go near the shirt pressers or the dry-cleaning machines which came later, although my brothers and I couldn’t resist jumping up and grabbing the sprayers when my folks weren’t watching. Which was hardly ever. But it was better than squirt guns, trust me, and almost worth the hell that ensued if we ever got caught. I mostly did intake and outgo at the counter. But I also sewed buttons.

6 thoughts on “To Button or Not To Button, Part One”