Every so often a shirt would come out of the manglers with a dangling, sometimes missing or, very rarely, a crushed or melted button. My keen-eyed parents could spot a button issue from across the room and would always jump to remedy the situation before it became… well, an issue. By the time I hit junior high and my father expanded the laundry to include dry cleaning, many other kinds of buttons and categories of repairs/alterations to garments were required as well. I grew up learning to pay particular attention to buttons. Were they washable, dry cleanable, securely sewn, in good condition? Or was there going to be trouble?

I was never technically supposed to sew buttons, but I did my share. Shirt buttons back then were pretty much standard and nearly indistinguishable from one to the next, because shirts (at least the ones that came into the laundry) were indistinguishable. The overwhelming bulk, no surprise, was white with the occasional blue oxford. Very rarely a pale yellow or a conservative stripe or little silly checks would show up. It was possible to match the buttons on most of these shirts from a limited variety of replacements. Not so today. If you lose a button and didn’t think to save the spare that came with, then you are majorly screwed.

Now that I’m examining my button history, I realize why I shy away from buttoned-down collars. Those fracking tiny collar buttons are a source of misery. Unlike the rest of the buttons on a shirt, which are generally attached to fabric that is double-layered, interfaced or otherwise thicker, those collar buttons live on a single layer of cloth. Good shirtmakers put a small disc of interfacing behind collar buttons for insurance. But sometimes that’s not enough in a place fraught with peril. Most guys have extreme difficulty buttoning them, particularly if a tie is involved. The frustration and discomfiture is reflected in the staggering number of raggedy torn holes where collar buttons are supposed to be.

So I learned to hoard all spare buttons. Since I was always careful to take care of any loose buttons on my own clothes right away I never had to go to those back-ups. So began The Collection.

Over the years I worked my way up from simply saving buttons to seeking out and buying cool and unusual ones. Buttons were my souvenirs of choice, small tokens I hunted down in the course of my limited travels, easier to pack in your return luggage than, say, a lamp. I even coached my friends to bring me back one great button from every trip. This was before I had any awareness of yarn. Today I hear the siren song of the LYS in whatever city I’m visiting. If I can browse buttons there, so much the better. 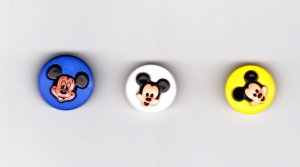 My absolute favorites are the ones I scouted at an open air market in a quaint square in The Hague, Netherlands. You might think me a total goof, traveling so far to bring back Disney. But that’s me.

I collect crummy old… uh, I mean, vintage specimens, too. My prize is a wonderful 50’s era carded set that includes a matching belt buckle. $1.50. WOWSERS. You can’t get one lousy new button for that much. Flea markets, antique fairs, thrift shops are horrible, dismal places to seek yarn but treasure troves for buttons. That’s also where I search and seize vintage crochet and lace patterns and books. But that’s another post.

The strangest new button I own is one I call “Mystic Pizza” after one of my favorite films. It was hand made in Australia by someone who musta had some great pharmaceuticals.

So, you ask, what do I do with my buttons since I obviously never sew them on my crochet. And that’s a valid observation. Once you create a button hole and sew on the button, then you are stuck with the closure.

I like to design open fronts that you can wear anywhichway the mood strikes using alternative closures, links, pins and ties. Besides, my collection is so eclectic and consists of so many orphans that the whole lot is totally useless for anything but display purposes. Not that I display them. I keep them safely stored in my collection of cigar boxes.

6 thoughts on “To Button or Not To Button, Part Deux”