Having blogged here about yarn twist, I was asked if it mattered which end of the yarn skein you pull first, the outside tail or the inside tail.  I had to think about that.  Eventually I came to realize that it does not make any difference in the twist.  Once there is a twist in the strand, that twist is the same no matter which end is up, because S or Z twist are determined by looking at the strand laid flat and is the same upside down or downside up.  Does that make sense?

It took a while for me to come to that conclusion. I am the one for whom the retort “No, your other left” was created. Left, right, east, west, clockwise, counter-clockwise, RS, WS… it all gives me a headache. This mild disorder of mine is the reason why I (and any of my employing editors who are wise or forewarned) grudgingly fork over large sums of money for technical editing.

A world-class crochet tech editor is worth her or his weight in dilithium crystals, make that naquadria, or at least well worth the 30-plus US dollars per hour that is the current standard fee. Considering that on my part, the process of designing, crocheting the sample, writing and sizing the pattern for a crocheted garment design (depending on the complexity) can consume well over 40 hours of my time, this hardly seems fair. I will never in my lifetime be offered $1200 for a single design that took me 40 hours. The way things are, I often don’t make minimum wage, and that’s the truth for most designers. But nobody said this career was fair.

Anyway, my problem with directionality was recently put in high relief when I began playing with my new in-line ball winder. A ball winder is a useful tool for any yarn work. It makes happy yarn cakes and is indispensable for turning hanks into usable form, for straightening up tangled skeins and for ripping.  My old one, a Royal ball winder has served me well for many years. The Royal winds with a tilting motion, but essentially spins carousel style.

Why would I bother buying a second ball winder when the one I already own works fine? You sound like my mother, who might ask the same thing. I got the idea while making a sample for DJC: Spirals in ribbon yarn.

Tess’ Designer Yarn Microfiber Ribbon is a flat, woven nylon ribbon, about 1/8″ wide. It has no twist, but it will show you how Z-twisty your yarn gets as you crochet because as we previously discovered, crochet puts Z-twist in the yarn.

Like many hand-dyed or specialty yarns, it is put up in hanks so you have wind the hanks into skeins or balls in order to use it.  This stuff is so totally slick and slippery that it cannot be wound in the customary way.  Trust me, the first time I worked with this ribbon I tried using my favorite wooden umbrella yarn swift to hold the hank along with my Royal ball winder.

It was a disaster, where the hank kept sliding down off the swift and the balls kept flying apart on the winder. The trick, according to the warning on the back of the yarn label, which I did not see until too late for that first attempt, is to use the swift sideways, Ferris wheel style, so that gravity doesn’t cause the hank to fall off the spokes. So  I switched to the metal swift which can be tilted. 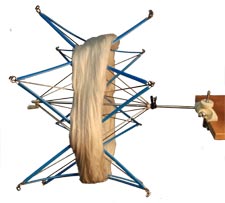 I don’t like this swift as much because there are metal fittings and rings that sometimes catch yarn strands.  But using this orientation coupled with winding the ball by hand and not with the Royal winder proved satisfactory, if a pain in the butt. It occurred to me that if I had a ball winder that worked Ferris wheel style in the same way as the swift, maybe it could be used for this and other similar problematic yarns.  So, ever the optimist, I got the Lacis In-Line.

But the orientation of the yarn cakes isn’t the only difference between these two tools.  When you turn the handle in the recommended clockwise motion (to the right, huh?), the spindle of the Royal turns in the same clockwise direction, but the Lacis spindle is geared differently and turns in the opposite direction, counter-clockwise.

The terms clockwise and counter-clockwise are not absolute; they depend on your point of reference. The prime example is the Earth’s rotation.  The earth rotates on the imaginary axis that runs from pole to pole toward the east. If viewed from the North Star Polaris, or if you’re standing at the North Pole, the Earth is spinning counter-clockwise.  But if you’re at the South Pole things get hinky and mirrored, so the Earth is spinning clockwise. Obviously the Earth hasn’t changed; only your perspective has changed.

BTW, the myth that water goes down the drain in opposite directions in the Northern and Southern Hemispheres is just that, a myth. It is true that due to the Coriolis effect on the rotational dynamics of our planetary atmosphere, cyclones (meaning not just tornadoes but large scale atmospheric disturbances that happen constantly) spin counter-clockwise in the Northern Hemisphere and clockwise in the Southern Hemisphere.  But at the level of a bathtub filled with water, the Coriolis effect is negligible.

So with that in mind, I should stipulate that the clockwise-ed-ness of the spinning is here being determined from the viewpoint of the end of yarn that you initially wedge into the slot. In the Royal winder, the slot is at the outer tip of the cone.  If you look down on the top of the cone, the end of yarn is going clockwise.  In the Lacis winder, the slot is in the disc at the base of the cone.  If you look at the disc from the bottom (your position while turning the handle), the end of yarn is going counter-clockwise. I know, too much information.  And I am just getting started.

Since we can see very clearly how twisty this ribbon yarn gets while crocheting, I wondered if it makes any difference which way the yarn cake (skein or ball) is wound?  You know I had to experiment.

With yarn that is spun and twisted, you can’t easily tell what the ball winding process does to the strand.  So I took a few yards of my ribbon yarn, fed it flat and untwisted onto the ball winder, carefully removed the mini cake, held both ends of the yarn and pulled it open.

Why was I surprised?  The Royal winder put S-twist onto the ribbon; the Lacis winder put Z-twist on it. This would not happen if we un-spooled the yarn in the same way we wound it.  In other words, if the cone or cake turns as we draw yarn, then the strand comes off without additional twist.  But we don’t do that.  The cake stays stationary, so the twist remains.

HOKEY SMOKES!  I never thought about that. I rushed to examine some purchased skeins to see in what direction they were wound and it was impossible to tell. When you look at skeins, the whirls of yarn look clockwise from one end and counter-clockwise from the other end. As I have said, the clockwise-ed-ness of the winding depends on the point of view of the beginning tail and with pre-skeined yarn you can never know which way the winding started.

So I looked at cones of yarn, where the beginning tail sticks out, usually visible at the base of the cone. Every cone I have, regardless of what yarn weight, fiber or twist, is wound the same direction, counter-clockwise, and therefore must create Z-twist in the feed as you draw it off the cone.

Oh, and one more thing I did.  I wound mini balls by hand as I would automatically do, without thinking too much about it.  Being right-handed, I see that I hold the beginning end of yarn in my left hand and tend to wind with the right hand, down the back of the ball and up the front.  Then I wound another ball in the other direction, down the front and up the back, which felt totally weird.  Each time I was careful to keep the ribbon feeding flat through the grip in the fingers of my right hand, but allowed the yarn to do whatever it wanted when it got past my grip.  Wanna know what I found?  Whichever way I wound the yarn, hand-winding added virtually NO twist.  YIKES!  Seems as though the instructions on the back of the Microfiber Ribbon ball are best.

My head hurts.  I honestly don’t know what this all means for my crochet, but you can be sure I’m going to do some more experiments when I am not so dizzy.