Zen.  Such an evocative name, a peaceful, tranquil sort of name.  You’d never guess that the prototype of this design was born in the aftermath of a wild and daring midnight airport rescue. 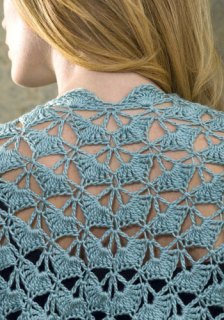 It was July 22nd, 2007, and the Crochet Guild of America Chain Link National Conference was about to begin in Manchester, New Hampshire.  The usual suspects, having hauled ass all afternoon setting up for the next day’s opening event, Professional Development Day, were gathered at the venue’s only restaurant/watering hole, in the mood for some serious unwinding. Spirits were high that night, perhaps due to the spirits that were flowing, but mostly due to the joy of meeting up with good crochet friends and getting to eat dessert for dinner.  Don’t ask.

But disaster was brewing, in the shape of massive storm delays and rumored airport worker strikes that would ground countless critical flights up and down the East Coast. One flight in particular, the one that was supposed to deliver two friends from Atlanta to Manchester, was unceremoniously canceled, leaving Jacqueline Kurman and Vashti Braha stranded until the next morning.  Jacque was beat, having spent the entire day traveling from the West Coast and was on the verge of despair. Vashti had just flown into Atlanta from Florida, so was the clearer-headed of the two and also the more desperate of the two.  Vashti was scheduled to teach during PDDay and was going to make it to Manchester no matter what she had to do.

The no matter what she had to do proved to be calling us.  It was around 8 pm, I had just scarfed down my chocolate cake, and the gathering at the bar was a little loud.  Although it was difficult to hear, comprehend and then share the news about Vashti’s lousy luck, eventually it was decided that Plan B would be put into action.  Plan Boston.  Vashti would get Jacque and herself on the next flight out, which would land them at Logan in a matter of hours. From there they would find a way up to Manchester.  Yeah, right.

“What, are you NUTS?”, I must have ranted,  “Logan is no place to be wandering around in the middle of the night looking for a ride.  You’ll be fifty miles away. What are you expecting to find at that hour?  Taxi?  That’s absurd.”

And then, before I had time to think about it, the words came out of my mouth.  “I’ll drive down and get you.” Done deal.

It was the logical decision.  I had driven to the conference that day and had my car with me.  Why not?  It might be fun, in a surreal kind of way.  So I ordered some coffee and asked who was coming along for the ride.  The night was drizzly.  Although I knew how to get to Boston, I hadn’t been to Logan in ages.  I could really use a navigator.  The gathering grew ominously quiet.  Not one of our buds volunteered.  All were either too tired, too preoccupied with preparations for the morning, too waffled to care.  All except one.

Amie Hirtes.  We had only met that evening, and I wasn’t sure if I wanted to spend a hour in the car with somebody I’d just met riding shot-gun.  I even told her as much.  Good thing Amie’s such a good sport.  Anyway, turns out I shouldn’t have worried, since she showed herself to be funny, outspoken, companionable, and totally uncritical of my driving; my kind of shot-gun.

The spotty drizzle made my windshield horribly streaky, but otherwise it all went splendidly.  The drive back to Manchester that took us well past midnight was a strange relief and a happy ending for all. Vashti, ravenous, munched on some chocolate I had stashed in my bag.  Practically in tears, Jacque, poor thing, simply could not believe that anyone would go out of her way to perform such a rescue, and was grateful beyond words.  So grateful that, a few weeks later, she sent me a thank-you surprise, a bag of wonderful yarn that she had brought back as a souvenir from a trip to Australia.

By the time the usual suspects met up again at the 2008 CGOA conference, again in Manchester, I had turned Jacque’s gift yarn into a lacy wrap-with-sleeves and made sure I modeled it for her to see.

That garment was the prototype for what would become, a few months later, beautifully re-envisioned and re-made in NaturallyCaron.com Spa,  the Zen jacket.  The pattern is available as a free download from NaturallyCaron.com.

I have since mounted other airport rescues, but none as daring as that night’s.  And I have designed many other lace garments, but none with such a memorable backstory.