In the years since I began using the Fsc as an integral part of my designs, I’ve worried about why many who try the Fsc are having so much trouble with it. I might be part of the problem.  Here I hope to be part of the solution.

I do not claim to have invented this technique.  The chainless foundation has been in use forever as one of the wonderful things you could pull out of your crochet bag of tricks if you knew about it.  But I had never seen the Fsc specifically written into a pattern, even when the design would have been greatly improved by its inclusion. There was an incredible amount of editorial resistance in 2004 when I first dropped the Fsc bomb in my own design patterns.  Resistance proved futile. 🙂 Resistance also equals V/I, depending on what sort of post you think you’re reading.

At the time there was no standard published name for the technique. In the vacuum I gave it my own title (no, I did not name it after myself), Base Ch/Sc, because it makes a base chain and a row of sc in one pass.  I did not want to use the word foundation in the name because to me a foundation row is the first pass of the actual stitch pattern which sets up the repeats upon which the fabric will grow.  After a bit of scrambling among the members of industry’s elite corp of technical editors, one generally accepted title prevailed.  This method of the chainless beginning of a piece of crochet is now known as Foundation Single Crochet (Fsc).

The Fsc is one of many chainless foundations, elegant solutions to the problems inherent in the traditional chain start.  I’ve written extensively about the beauties of foundation stitches, but haven’t addressed the major angst it has engendered among newbies to crochet and to the technique.

One of the important aspects that I never thought to mention because it seems so obvious while you are crocheting it is that it comes out upside down. It has the feeling of making a long, skinny strip that is one stitch wide, and for those who are familiar with Tunisian crochet technique, it resembles the way the edge stitch is worked as you begin a return pass in TSS. 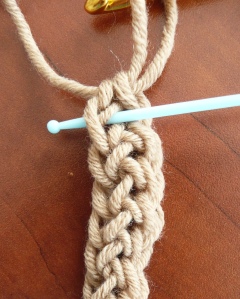 Keep your eyes on the “chain” step of the Fsc.  I tell people to physically grab the chain after you make it; pinch it and keep it relaxed and open so you can 1) find it for the following Fsc, and 2) work into it without struggle.

And still there is confusion.   There is a variant to the Fsc that is often described and published side by side with my designs.  The variant is made in almost the same way, but it leaves one single strand of chain at the bottom of each single crochet and this can compromise the sturdiness and elasticity of the foundation.

This is the view from the WS (the back side of the single crochet). 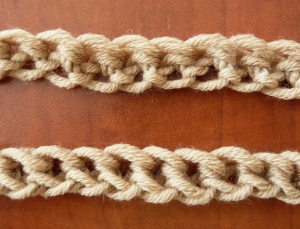 Both variants are named Foundation Single Crochet.  For some applications it is not critical which one you use.  But in some rare case where I specifically mention another method, ALL of my designs that use Fsc refer to the 2-strand variant.  It may seem a small thing, rather trivial to you now, but trust me, it makes a world of difference in how the foundation behaves when you continue to work more crochet on both the sc and chain edges.

So, in case you’ve been looking for an overwrought, obsessive account of how to do this useful technique, I’ve excerpted some stuff from my DJC Designs pattern, Birthday Girl skirt.  It is written specifically for the beginning of a top down skirt, however the information can be generalized for working other types of projects in rounds (like top down sweaters) or worked flat without connecting into a ring.

Fsc (foundation single crochet): This creates a beginning row of single crochet, each with its own chain at the bottom, for a sturdy, elastic foundation.

— This foundation has height.  You have connected the stitches at the sc edge, but the ch edge is not yet connected.  Eventually, whenever you get to it, at least before you go back and put the waistband on the skirt, thread the beginning tail onto a yarn needle and loop it through the last ch of the foundation to close the gap, weave in the end.

There is one other caveat I can offer that might relieve some aggravation.  In many of my top-down top designs, the foundation will not remain flat or straight.  Don’t be upset when it becomes curved after laying on the following rows of stitch pattern.  It is suppposed to curve.  By squeezing more stitch pattern onto fewer foundation stitches you are giving a jump start to the increase shaping of the yoke and are on the road to creating the shoulder bumps that fit so nicely.

For a more compete survey of the Foundation Single Crochet and other techniques, purchase and view the on-demand webinar, Chainless Foundations, now available at the Interweave Store.